For this project I conducted a time series analysis of the frequency people visit relatives from 1974 through 2010.   I expected that on average socializing with relatives changed during this time period due to increased distances people are living away from the region they were raised, changes in income and general changing patterns in family dynamics.

Net of all other factors and at any point in time, the analysis revealed that having children increases social time with relatives and living away frome one’s hometown decreases it.

Real Income (realinc): Real income of respondent in US dollars.

Children (childs): Number of children respondent has had.

Socializing at Bar (socbar): Frequency of attending a bar. Indexed from 1 to 7, 1=Never, 7=Daily

Since socializing at a bar is not significantly correlated with socializing with relatives, it was not included in the model.

It is always a good idea to start an analysis by plotting the association between the dependent and independent variables.

The graph shows a slight decrease in spending time with relatives (r=-0.10). I expected the association to be greater. One reason there may be low association is that 78% of the respondents took the survey in the region in which they lived when they were 16 (for these cases dist=0). 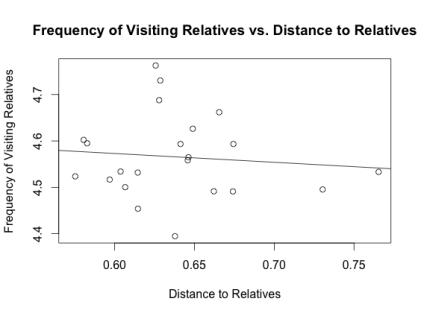 The focus of the analysis was to explore the association between socializing with relatives and distance living away from relatives over time. I ran an initial model with just distance as the independent variable and it was not statistically significant. However, when I ran the model with year as an independent variable, it produced these results:

The model shows that, net of time, as a person moves one region away from their hometown, spending time with relatives decreases by -0.80. Year is also statistically significant but the effect size is low. A yearly increase shows that socializing with relatives increases the index by 0.006

D-W Statistic is not close to 2 and p<0.05 for all three lags and therefore there is significant autocorrelation in the model.

Although the above more simple model had significant serial correlation, I explored adding the remaining independent variables to the model:

The model was tested for multicollinearity using the variable inflation factor (VIF):

The VIF for the final model:

None of the VIFs are higher than 10 so although there is some co-linearity, it is not that severe.

The Durbin-Watson test showed first order first order serial correlation. I also checked the variables in my model for unit roots using the Dickey Fuller test (with drift) and they all have unit roots at lag order 4 and a couple do not have unit root lag at 0 (income and childs). This indicates that the coefficients in my model (final model above) are not accurate and hence must be corrected with a method such as co-integration. Although these results are an improvement over the more basic model, the model needs to be corrected.

I first attempted to correct the model using a first difference time series regression but none of the variables were statistical significance (p>>0.05).

Here are the results for the final model:

The Ljung-box test was used to test for serial correlation:

This test shows that there is no autocorrelation left (p>>0.05) and the model coefficients are now highly accurate.