This project had two research objectives. First, it explored the association between crime and business activity. Second, it explored the varieties of types of crimes (violent or non-violent) and space.

The four crime variables were the dependent variables in the analysis. They were chosen based on whether they were violent or non-violent felonies. The two violent crimes include murder and felony assault. Felony assault is defined as stealing with physical harm to the victim. The non-violent crimes were burglary and grand larceny. Burglary is defined as breaking or entering a dwelling at night with the intent of committing a felony and the theft of personal property. Grand larceny is the theft of personal property having a value above a legally specified amount. The variables were normalized into a percentage by dividing by the population of the precinct and multiplying by 100. Descriptive statistics of these dependent variables are show below:

A map of the crimes is show below. As can be seen from the maps, violent crimes (murder and felony assault) are primarily clustered in Central Brooklyn, Eastern Queens, and Harlem and the South Bronx.  Interestingly, the high rates of non-violent crimes (burglary and grand larceny) are located in high socio-economic status  (SES) areas of the city, primarily lower Manhattan and precincts close to Manhattan, as well as in certain low SES areas (i.e. Central Bronx). 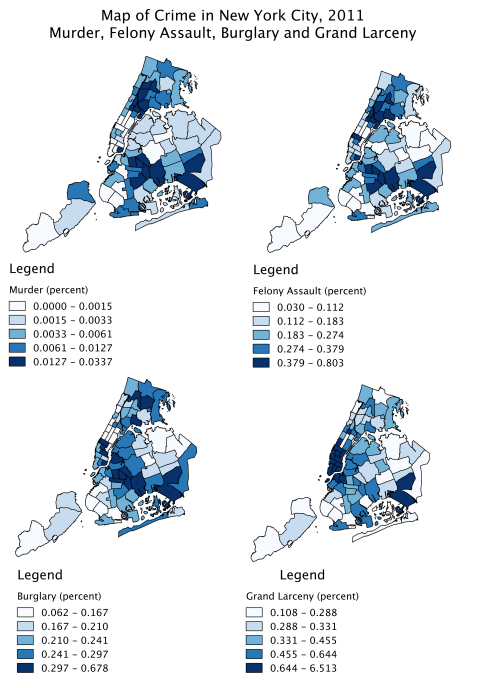 The main independent variable of interest in explaining crime rates is total business per precinct. This variable was normalized into percent per population (or business density) by dividing total businesses in precinct by the precinct’s total population and multiplying by 100. The control variables included measures for socio-economic status (percent of people eligible for food stamps) and percent unemployed. A measure for non-native speakers of English in the precinct was added to the model through a percent of the population whose first language is not English. Race was also included in the model and included percent white, African American, Native American, Asian, Pacific Islander, biracial and “other” race.

Evidence for spatial dependence for the crime variables was determined using Moran’s I. The results show that space (location in the city) is an important independent variable for explaining variations in crime. For a more thorough discussion about the Moran’s I check out my analysis of spatial regression of home values in the United States.

Three models were calculated for each crime. The first model included percent total businesses. Spatial dependence in the model was evaluated using the Moran’s I error, the Langrage Multiplier lag and error, and the Robust LM lag and error. If the tests showed that a spatial lag was statistically significant, the model included a spatial lag. Spatial lag was significant for all of the models except for grand larceny and for this variable it was dropped from model 2 and 3.

Model 2 added the non-English, food stamp eligibility and the unemployment control variables and model 3 (the final model) included race variables. The final model results show that spatial dependence was significant and negatively correlated with violent crimes (murder and felony assault). This result suggests that high rates of violence, perhaps due to gang activity, in one location takes away violence from its neighboring precinct. Spatial dependence however was not statistically significant for non-violent crimes (burglary and grand larceny). Business density increased crime rates in precincts for grand larceny, burglary and felony assault, but not for murder. This result suggests that non-violent crimes, particularly those that involve theft, tend to be located in precincts with higher rates of economic activity, but murder is independent of economic activity.

A table of the final regression models is shown below:

The positive correlation between burglary, grand larceny and felony assault and business density shows that increased business activity leads to higher theft related crime rates. The findings show fairly strong support that motivated offenders are attracted to precincts with greater economic activity. Interestingly, the correlation between murders and business activity is not statistically significant, and it indicates that murders are independent of economic activity. These findings have important policy implications. They suggest that policing in neighborhoods with higher business density is particularly important and should focus on thefts. In addition, in less economically developed neighborhoods, where business is beginning to take off and success hinges on low crime rates, may benefit the most from increased police presence.

Space and crime rates were statistically significant for all types of crimes (except for grand larceny) but for violent crimes (murder and felony assault), after race controls were added to the models, spatial dependence flipped from a positive to negative correlation. After race controls were added to the burglary model, space became statistically insignificant. These findings inform our understanding about violent crime and space. They suggest that violent crimes take away the effect size from their first lag neighbors. As violent crime increases in one area, it decreases in its neighbor. An explanation for the change in correlation is that race is highly clustered in space. The map below shows this clustering – felony assault is highly clustered with African American, other race and to some extent the Asian population. 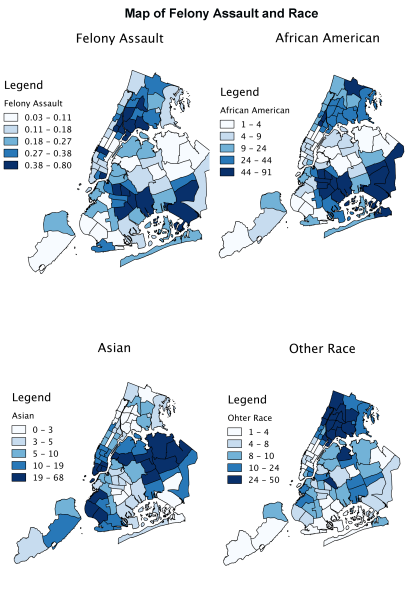